Printing across borders? It would appear not!

The aim by the ISO TC130 committee, which is responsible for all ISO printing standards, to align the ISO 12647/ 2013 for paper types PS1 and PS5, coated and uncoated, to the figures in Fogra 51 and 52 data sets ad the associated ICC profiles has been rejected by the committee.

This refusal to change the CIE Lab values for the white paper points was from the US and Japanese delegations, which pointed out that the papers used in these regions matched the 2013 version of the standard rather then the revised figures from Fogra.

Fogra with the Fogra 51 and 52-based profiles had revised the white paper CIE Lab figures to reflect the brighter white papers, with the high OBA (optical brightens/fluorescents) used in European papers.

So were does international printing standardisation go now. Has it spilt into regions?

The implications to an individual printer or client will depend on the scope of their activities across these regions. So the main area for concern is likely to be the large multi-nationals and brands that print in across all regions.

So will there be a need prepare production print ready files for these regions using the ICC profiles for each area and region?

Europe would require profiles based on Fogra 39 or 51. For Web Offset you may need to supply files to a Fogra 45 profile, PSO LWC improved.

In the USA the GRACol/SWOP 2013 profiles from Idealliance will be used. These are based on the 7 CRPC color data sets in ISO 15339/CGATS 21 specifications.

So practically what difference would be noticed if using, say a Fogra 51 based profile in the US without it being repurposed, or indeed, any other profile and regional combination? Then factor in the older profiles based on the 2004 Amd 1 version of the standard and there are a lot more cross regionally, cross standard combinations.

I looked at this when the beta versions of the Fogra 51 profiles were released. I took 4 test images and converted them to: 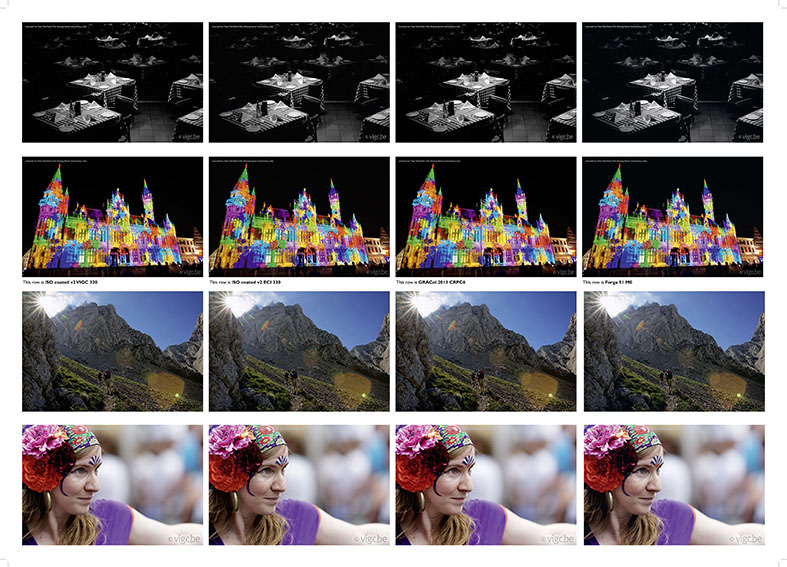 This was then contract proofed to Fogra 39. On examination, yes, very small differences could be seen between the differing separations/profiles, but if that difference had been within a print run, most would be happy.

So for many markets there may not be a need to produce multiply regional versions or reprocess files in workflows or colour servers to maintain a reasonable common colour appearance across regions.

So I guess the message to printers and clients is proof and test images that may need to be used when ‘Printing Across Borders’ in order to decide if images need to be re-purposed for differing regions.

If you enjoyed this article, please consider sharing it!